Is a Smart Phone App the same as a Detection Device? 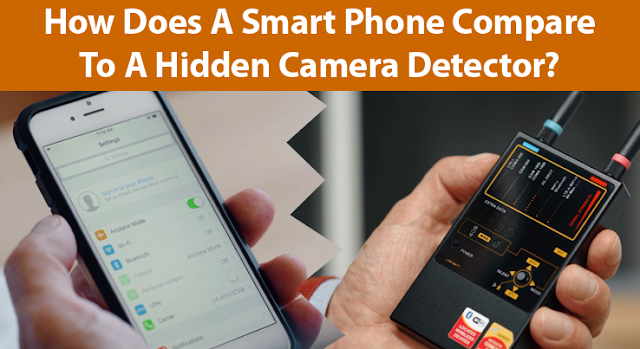 Is a Smart Phone App the same as a Detection Device?
As the news cycle shows recent stories of spying threats in hotel rooms and rental houses many developers are touting smart phone apps as an option for scanning a space for hidden bugs or video cameras. But how effective are these apps? We took a look and discovered some key differences between common 'detection' apps and the average handheld detection device.

Magnetic Field Sensor
Most of the smart phone apps require your phone to have a magnetic field sensor or they will not work. The magnetic field sensor is similar to what is found in a stud finder or compass app and not all phones come equipped with it. Handheld detectors like a camera finder or an RF signal detector do not require any additional technology to work with the exception of batteries.

Sensitivity Adjustment
The smart phone apps did not offer much ability to change the sensitivity of detection. The magnetic field sensor did do a good job finding electronics but it found all of them. So a camera hidden in a picture was easy to locate. A camera hidden in a clock radio was masked by all the other electronics inside. Likewise, the apps that detected RF signals picked up signals for everything from a wireless mouse to the hidden video transmitter. Using a Wireless Camera Detector we were able to narrow the sensitivity and focus on areas that were most likely  to have a hidden camera or listening device.

Our Take Away
Smart phone apps are a viable solution for a one time scan of a very small, bare, space. But for even an average sized space, like a hotel room, it would take a fair amount of patience and time to scan the entire area. Even then a camera or hidden bug inside a clock or electronic device could be missed due to the interference from non spying electronics. For users traveling frequently or users concerned about spying outside of hidden camera or bugs such as GPS trackers, a handheld detection device could be a good investment.